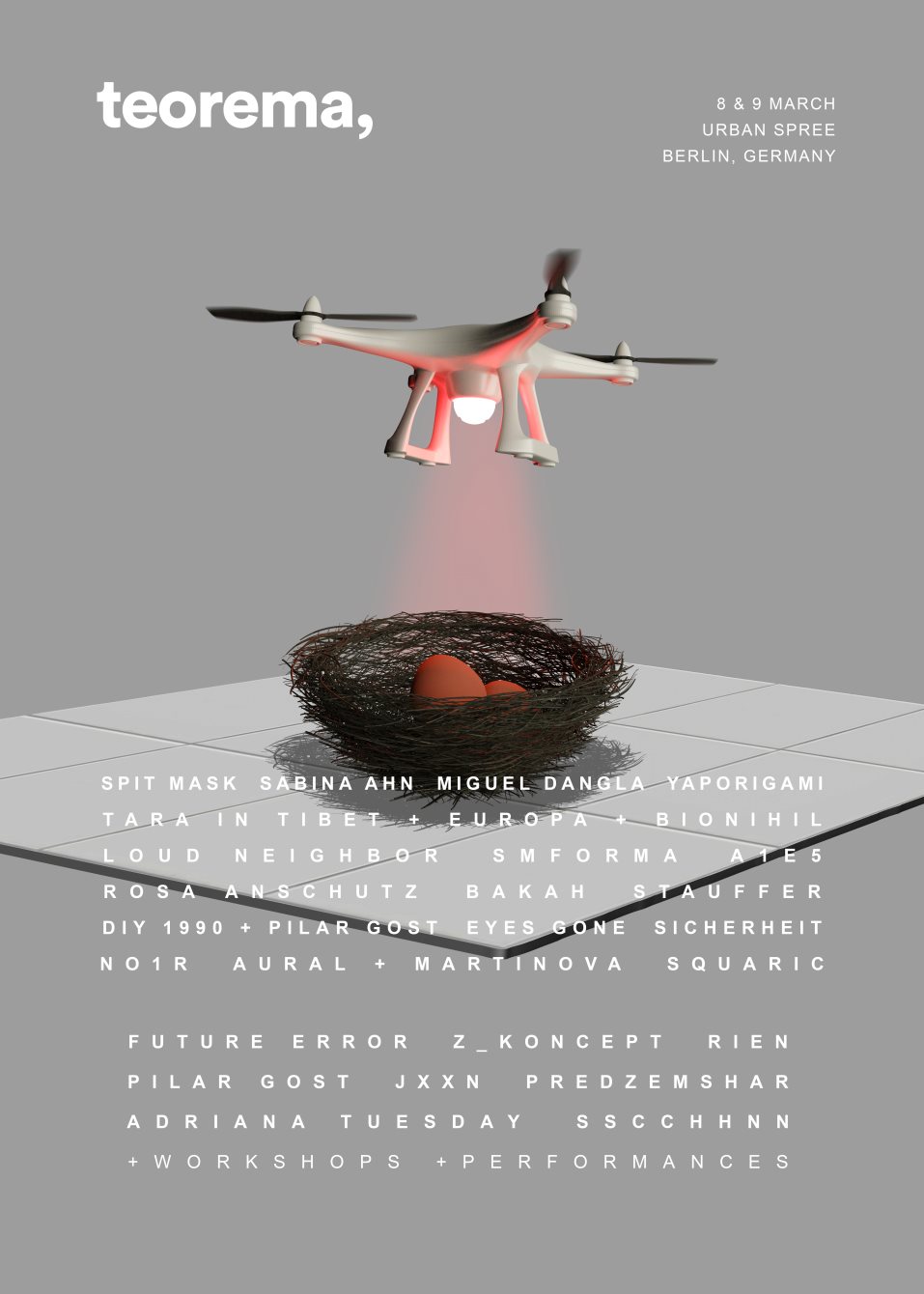 Two weeks ago I assisted to the Teorema Festival in Berlin at the Urban Spree. I knew about this event because of Rodrigo, who spoke to me about it during Parallel 2018. There were cheap train tickets from Munich to Berlin so there I went.

I came there around 19h, and Yaporigami was waiting to start his performance. Here you can find what his performance was about. Crazy futuristic objects which were dancing and moving everywhere with the sounds. I have to say that I was impressed with the quality of the projector being used in the room, which was incredibly clear.

Directly after him Aural and Martinovna started. I had almost to laugh when I saw Aural putting the sensors into a plant for generating sounds, and its because my last Video + Track Waiting for nothing.

I made a short break to have dinner with a friend, and when I came back, DIY 1990 and Pilar Gost were starting to perform. Strobe, smoke, tons of noise and distorted voices made it incredible and hypnotic. It ended up with a beautiful manifest, read by Pilar.

When they finished, SICHERHEIT (Josey Heyes and Arcadia) performance started, which was crazy as fuck. A woman appeared in a kind of hazard protective clothes, and everything began. I don’t want to spoil it to you, but if you have the opportunity, you should not miss them. I loved it and I don’t think I’ll forget it.

Later A1E5 (efrenmur & dinamitemusic) started with a hypnotic techno live act. Because I began to have some chat with the people in the backstage I did not see the whole performance from Tara in Tibet + Evropa + Bionihil. It was peculiar mix between noise, heavy basslines (the MS-20 was on fire) and distorted voices signed live by a guy.

After them, Spit Mask started with a kind of metal electronic industrial performance. A unique mix between synthesisers, techno-industrial beats, sort of EBM and “heavy metal” voices. Sometimes I had to think about Front242.

Eyes gone started performing with a much more danceable live act. I was kind of sceptical when I saw the guy stying on the stage wearing a suit jacket and formal shirt. But later I was surprised for good. Banging Techno with endless rise-ups made all the people dance.

At some point some people decided to start slowly moving to “hain”, so I decided to try my luck getting an unexpected “ja”. I wanted to come back to see Squaric performing, but after meeting some old people again, it was already too late.

In summary, it was an incredibly exciting and inspirational event, where I was able to meet a lot of new people and artists. It worked as a kind of refuelling inside me.

Congrats to the whole team for such a, from my point of view, successfully event 👏👏👏

Special mention to Alberto, Pilar, Pau, Ignacio aka Space Exile and of course… Rodrigo. There where more people but I’m shit remembering names.