This last weekend I was in Berlin visiting some friends, and we decided to visit the Metabolic Rift @ Berlin Atonal Kraftwerk. I’ll try to write a short review about my experience 🙂

Before starting the tour (we were a group), they explained that the visit is a kind of “circuit” where we will need to walk and advance, leaving nobody behind and trying to keep the same pace. They warned us about some epileptics risks and a massive amount of stairs waiting for us.

It was funny to see that the tour started on the Tresor main floor. It felt so strange to be there with just ten persons and no music…

Once in the middle of the room, visuals started on an old TV while voices were coming and going everywhere. It felt like a little creepy, but that was all. Then we advanced through the Dj pool, going by backstage and continuing to other big rooms. (I could finally see how the backstage room from Tresor looks! and it was bigger than I expected).

There were some metal structures in these rooms trying to simulate a variety of animal forms, but with machine parts. We kept walking through more rooms where concrete was the main subject. At some point, some visuals started in a wall with some breaking dirty techno? accompanying it. A friend made a short video so you will get an idea,

The following rooms looked like an old abandoned bunker till we made it to a door. After the door, the stairs were waiting for us.

If I’m not too wrong, we walked stairs like we would be going to the 10th floor of a regular building. The good thing is that we were distracted the whole way because there was a strange voice and an arm above us, like guiding us. That made the entire way to the top much easier, as we were all the time expecting something to happen. Only at the end of the endless stairs, we were able to see the guy,

After the door, a surprise, at least for me, was waiting for us… this huge hall, 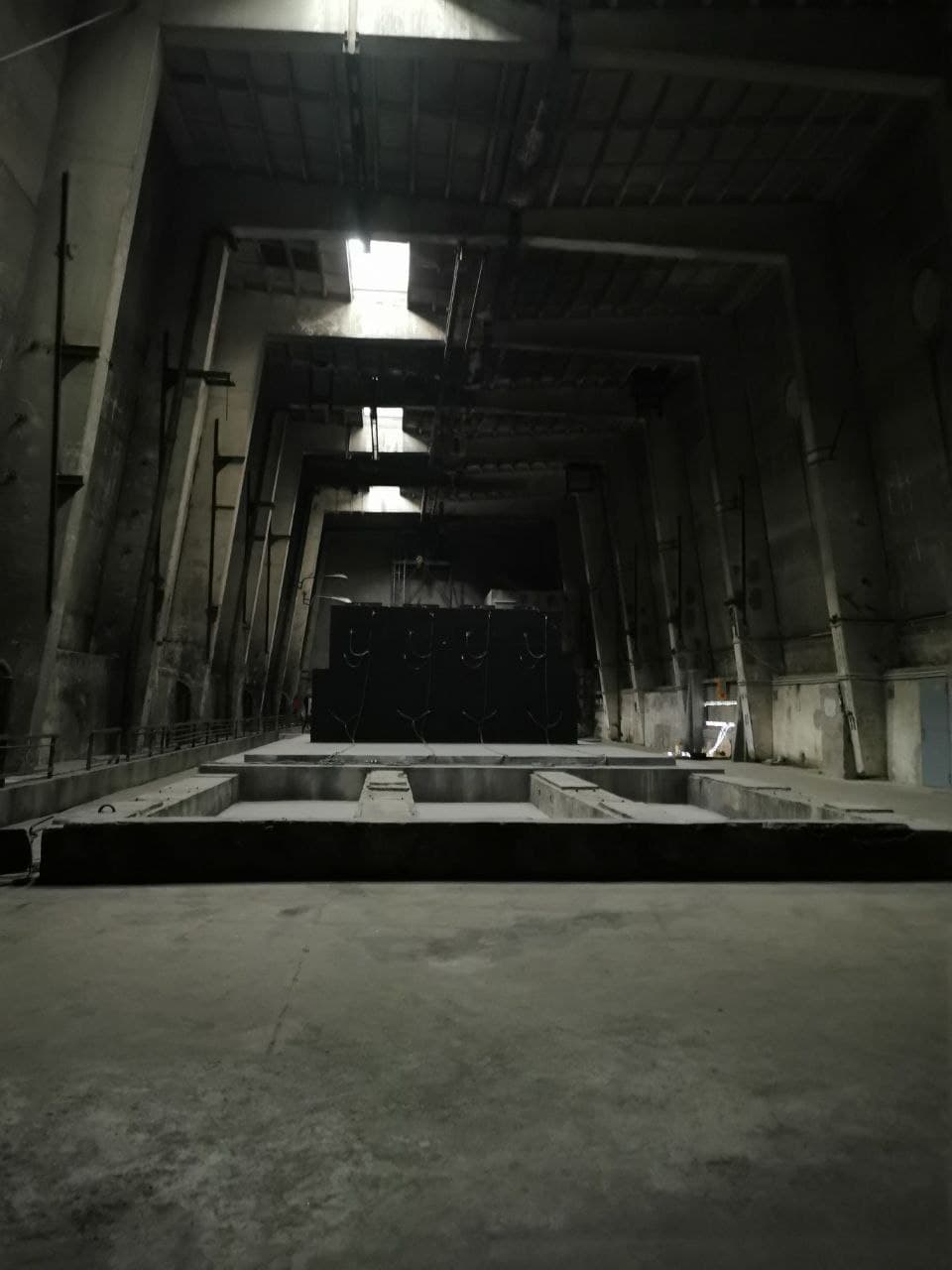 As we walked through the Soundsystem, I started to laugh, as I could recognize that Killasan sound wall from some open-air parties (here you can find some more info about it), 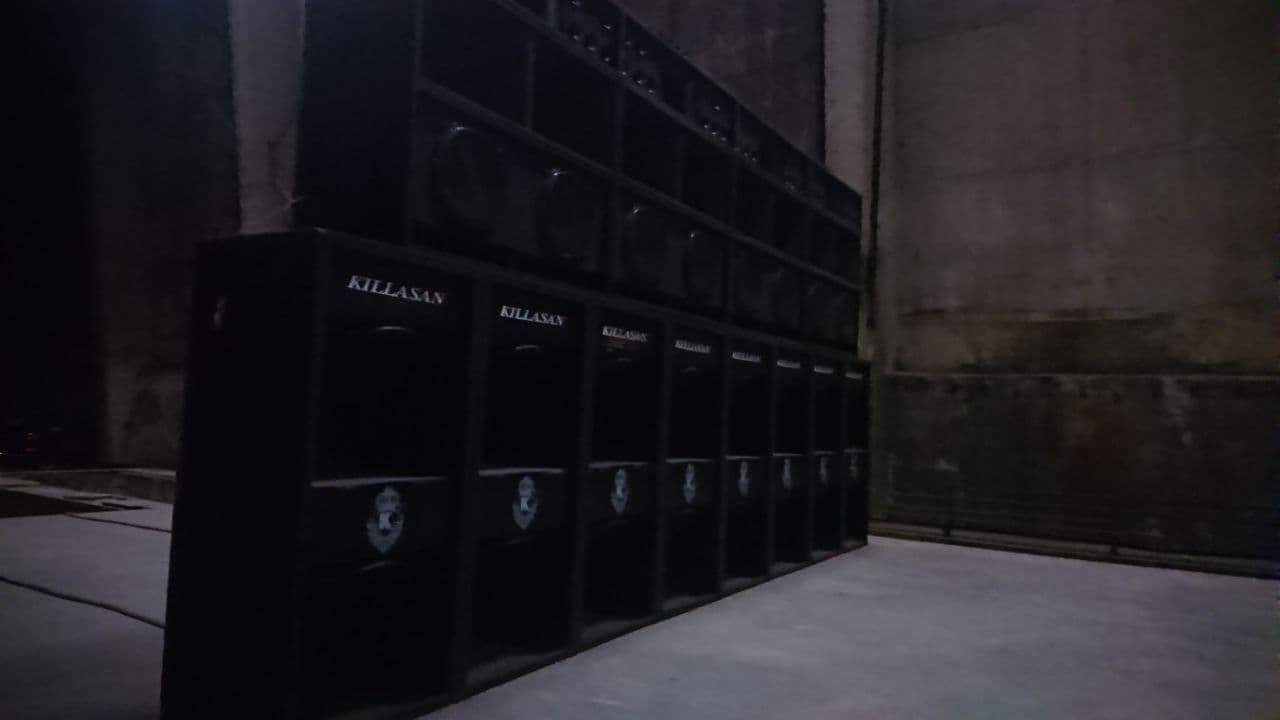 As we walked to the end of the hall, the Soundsystem started bumping some techno? and this is what happened,

After around ten minutes, the show finished, and the puppet deflated and died, so we continued, and we proceeded to walk down all the stairs back to the ground floor. The guide explained that we had so much time as we wanted to explore and see the 2nd part of the exhibition. And that’s what we made.

This was the 2nd hall, 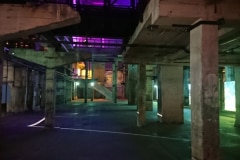 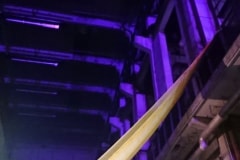 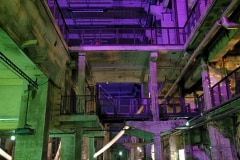 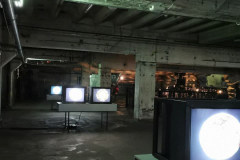 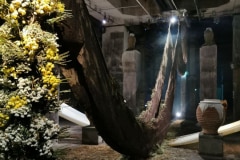 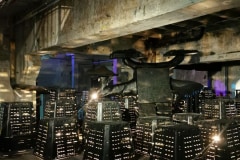 There were some “shows” which ran once every 30 or 20 minutes, and we could see some of them.

One of the ones I liked the most was in a corner. There were some destroyed cars with some subwoofers in the trunks. This was the start,

Every crashed car represented different countries/cultures, or that was my impression. Some objects and details inside the cars could give some insights or at least ideas to think about.

To summarize, I was impressed by the location (I was never inside the Kraftwerk, only at Tresor) and some of the art installations, like the air puppy.

If you are in Berlin and you can still attend it, I can recommend it. We were inside for around two hours which felt like twenty minutes.