Back from Nepal after two weeks hiking but a lot of thoughts, mixed feelings and somehow inner changed.

I’ll try to sum up all those impressions and feelings in the most neutral way I can, all from my personal point of view. I don’t want to convince anyone, I just want to share my experience and thoughts.

First impressions about the country

Even already know that Nepal is a poor country, I was surprised to witness that level of poverty and such a big difference between social classes.

About the people, I should split it between Kathmandu and the hiking tour.

Another thing which surprised me was the military presence in the capital, Kathmandu. It was the first time I see so many military watchtowers in a city. For me, as European, It looked more like a dictatorship than a democracy. Anyway, I witnessed not confrontations or violence.

And one topic more, which surprised me was the level of plastic garbage on the streets and in the mountains. It made me think about the actual status of the natural environment. A random corner around the streets of Kathmandu seemed to be the right place to create an improvised dump. Even at 5.000 meters, I could found plastic bottles and plastic envelopes of instant-soups, as if they were part of nature. At the end of the post, you can see some examples. During the last days in Kathmandu, I walked through a small river in the city centre, and I was slapped by a putrid smell which almost made me puke.

One of the things which amazed me during this trip is Buddhism. Being used to Christianism and Islam, Buddhism seems to be a more peacefully religion.

From what I learned from the guides (both Buddist) they seem to rely on respect. Live and let live.

Another thing which made me thought it was that almost all Buddist writings were “live written”, unlike the Bible or Koran. That means that they are, at least for me, more trustfully. We all know about that game.

Another thing I like is that they have demons not as something evil, but as a kind of “teachers”. The representations of the demon and god Mara are my favourites.

Maybe I would be Buddhist if I had the opportunity to learn it in school, who knows. 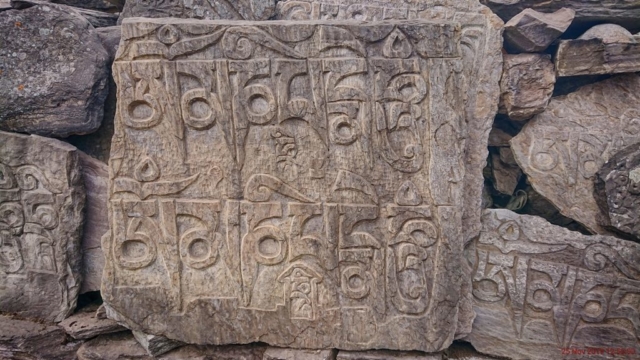 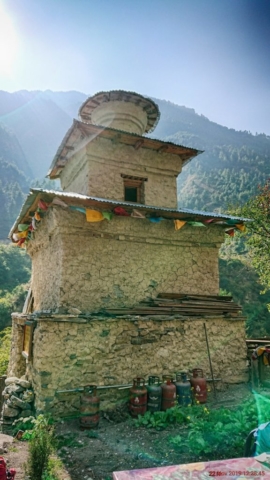 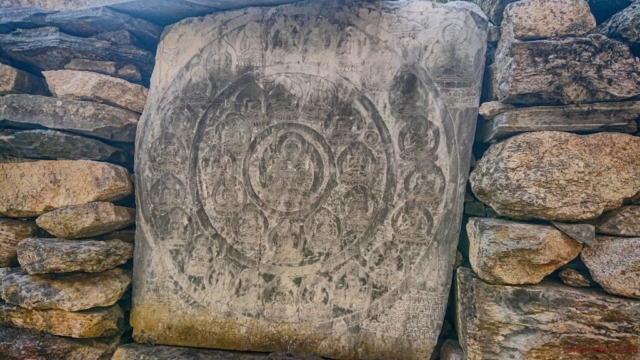 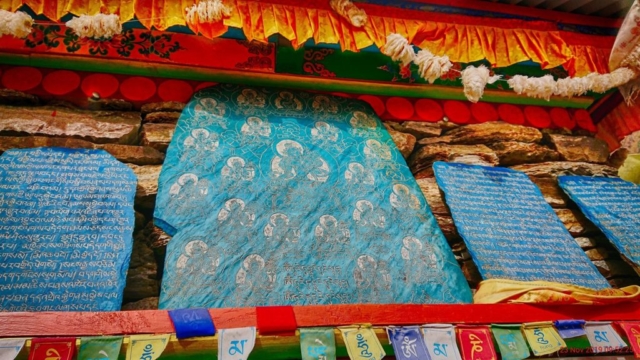 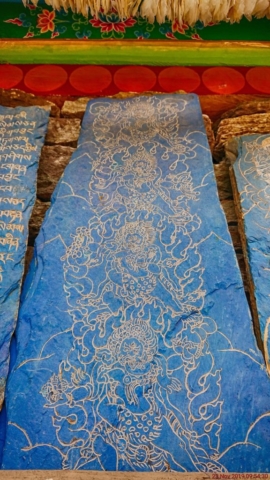 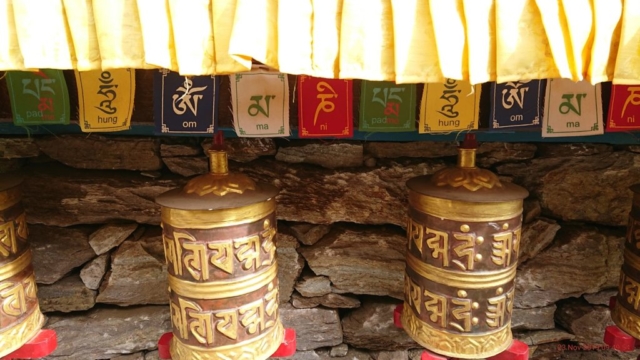 About the Trekking Tour

Even being scared as fuck and not really prepared for it, I four the Manaslu tour not so hard as I expected. Seeing that the farthest distance I walk in a typical day is from the subway to my flat, I was scared about walking 177 km in around 14 days. I also was afraid of the height. My most significant peak was around 4,1k, and during this tour, we had to go through the Larkya La Pass, which is at 5106 metres. So I didn’t really know how my body would react to those conditions. But both, distance and height were not a problem, and I just became one small foot blister the last days.

Being told this, I have to mention that I almost died frozen during the Larkya La Pass. No, I’m not kidding. Never on the hiking tour description was indicated that we should be prepared for an ice storm at 5k with temperatures close to -15°C. That day we started at 4,1k to walk at around 5 AM in the darkness, and it began to snow a little bit, nothing critical. We were already around two hours hiking, and it started to snow harder. We knew that till the pass it should take around 4h, so we were just in the middle between the camp and the pass. At some point, with the height, it started to get colder and colder and windy as fuck. We were in the middle of an ice and snowstorm. It was the first time in my life that my eyelashes and moustache literally froze.
I was wearing 6 layers (1x Longsleeve T-Shirt and 5x Jackets) for my chest, 4 layers (1x Long underpants, 1x jogging underpants, 1x regular hiking pants and 1 Waterproof cover for trousers) for my legs, 2x pairs of socks and gloves.
After longer than one hour walking in that snow and ice storm, I witnessed how two fingers of my gloves were totally frozen from outside. I got a little scared because I was not really feeling my fingers anymore. I was wearing three hoods and one hat, at the same time, and at the edges began to form ice stalactites.
In that point of no return, we kept walking and even waiting for other slower group members (we were 8 in total, some with breath problems) in such conditions.
Before arriving the pass we barely could see 5 meters before us, and we and our guides got almost lost. From time to time, I was not able to walk due to the wind, and I’m used to strong winds from my hometown.
Don’t ask me how but we found the path again and we reached the pass, and we walked down 1,7k meters till the next village.

As an anecdote, we found out the next day that a Canadian girl lost two of her food fingers due to the cold. One of my aluminium bottles containing water was completely frozen.

The commodity level and food offer of the teahouses/lodges surprised me. I never expected to have peanut butter and honey for breakfast every day. The meal offer was also not small, offering a wide diversity of Nepalese dishes and even some Europeans too, like pizza or pasta.

The rooms where we slept were not good isolated, as I already assumed, but having a decent sleeping bag was enough. One thing I did not suppose was to have the earplugs for sleeping. For me, they were totally underrated, but they saved my life.

Nature was massive. Everything was more prominent than anything I’ve seen before. I just missed some more wildness. With wildness, I mean more wild animals. During the 14 days, the only wild animals I witnessed were one big spider the first days, some blue sheeps the day before the pass and some wild monkeys at the end of the tour. Luckily for me, I didn’t see any snake or cobra. I guess this is because the path is quite past by villagers and shepherds, so wild animals usually stay away from it. To mention that we saw footprints from snow leopards in the snow as we walked to the Larkya La Pass.

The sad side of the story

One thing that bittered my whole hiking experience was seeing the first day how our “carriers” were going to carry our extra bags.

On the information provided by the travel agency, there was no explanation about how or what would carry our extra bags. The only requirement was that we were not allowed to have more 13kg on those extra bags. Therefore I supposed that they would use some kind of animals, like donkeys.

I decided to take a 50-litre bag even though it was much smaller than what the people in the group were going to take. When I weighed it at home before the trip, full, it was about 8kg.

My bitter surprise happened the first hiking day when I witnessed who and how that extra luggage was being to be carried.

A group of young villagers was going to be our “sherpa porters”. That meant each of them would carry about 26-30kg, mainly with his head forehead and his back. Here you can see how it looks like,

If I had known before booking the trip, I would not have done it.

They were going to do the same path as we. The only “small” difference, is that they will do it with around 20kg more in their backs and with equipment (clothes) much worse than ours.

For me, as European, it looked like having private slaves.

“It is ok! At least it is a way by which they can earn money.”

To what I replied with:

“ok, fine! Then let’s support sex and drug-related tourism in poor countries. At least it is a way by which they can earn money!”

Using money and tourism as an excuse is not valid to me.

I know that if I’m not there, other tourists will book their services as porters, but that would be they, not me.

Because of this and many other reasons, I felt really frustrated, and the last day I decided to gift them some of my equipment and clothes. Seeing how a guy instantly used one of the band-aids on his hand, broke my heart.

Because almost none of them could speak English, I prepared some text which was translated to Nepalese by one of the guides to them.

I don’t know if the text was one to one translated, but I chose the guide that gave me the most confidence.

I’ll never forget their looks during the translation.
They will be burned in my brain forever.

At the end of the “speech”, they just came and hugged me, so I guessed the message was delivered.

I still wonder how they survived the Larkya La Pass day. I guess Nepalese people are hard as fuck.

Because of this and other many reasons, I’m preparing a release where all money will go to the NGO https://www.apasherpafoundation.org/

It is the only NGO I’ve found related to the topic. If you know about other options, please let me know.

After the tour, we had some days on Kathmandu. I used one of those days just for walking around the city, trying to discover some urban or street art.
These are the things I found after five hours of walking (I’ve skipped the dead rat pictures). 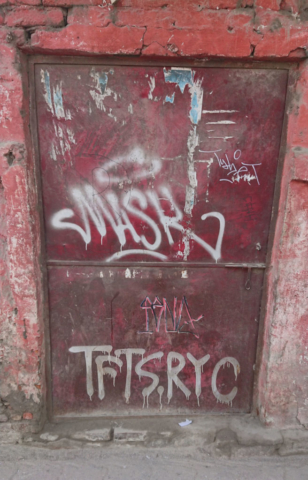 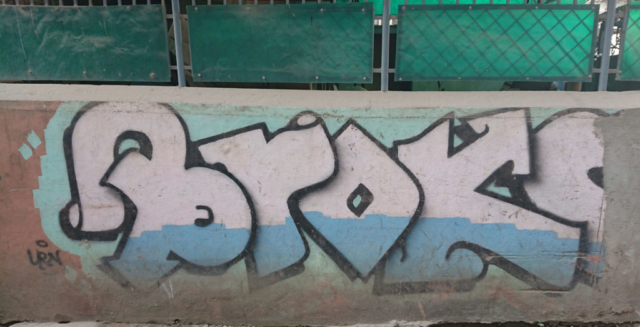 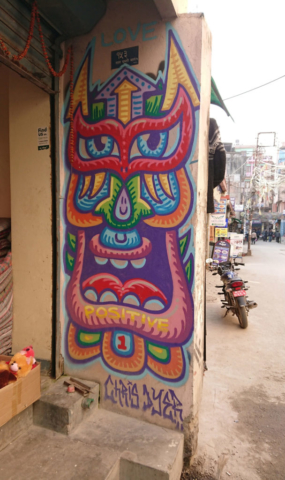 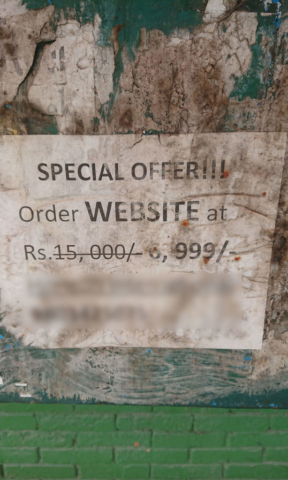 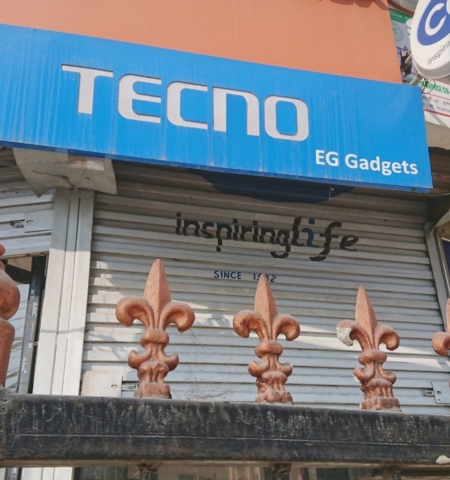 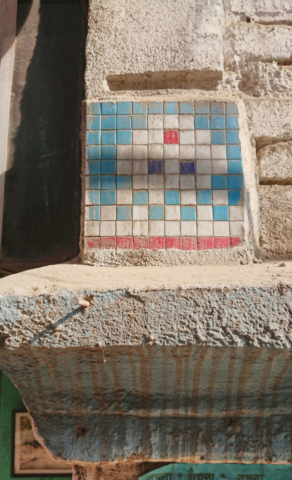 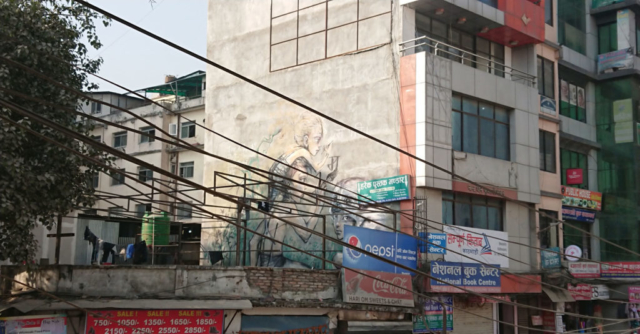 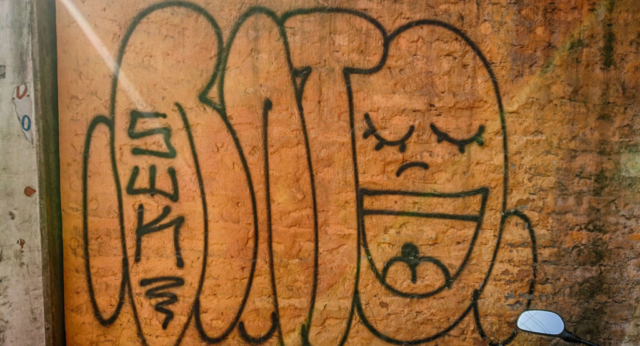 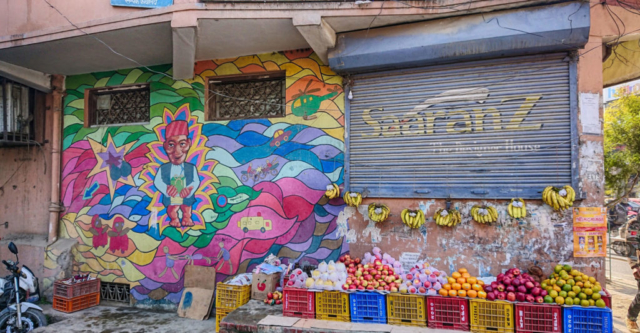 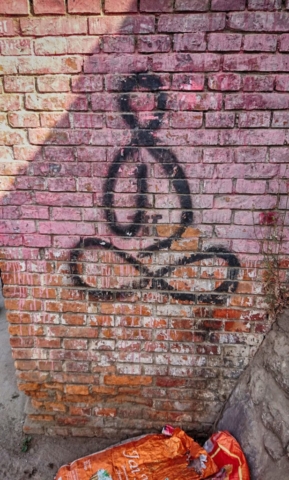 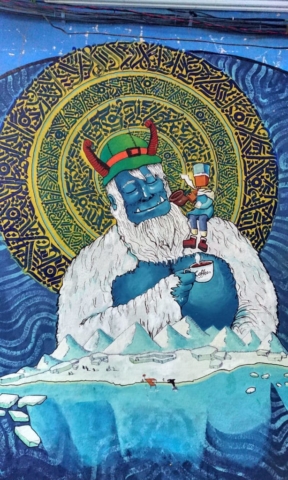 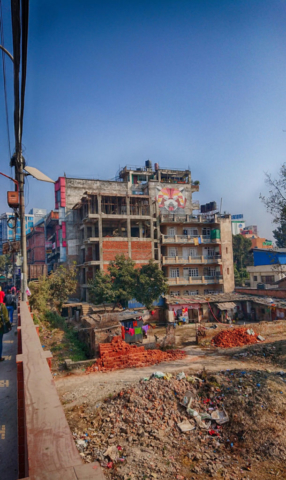 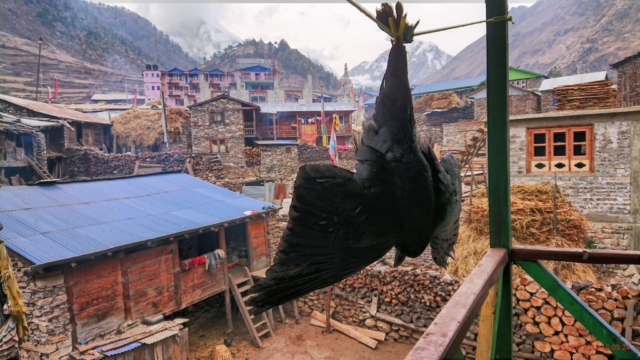 And as promised, some pictures of plastic garbage. 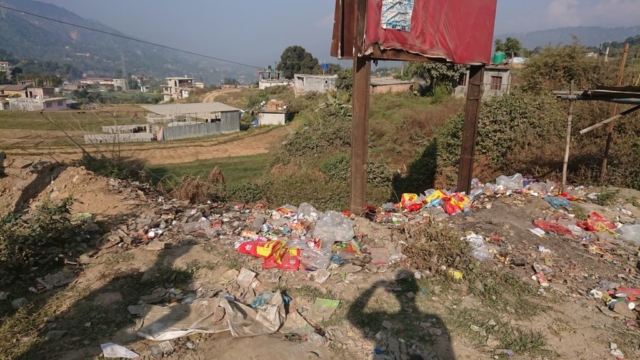 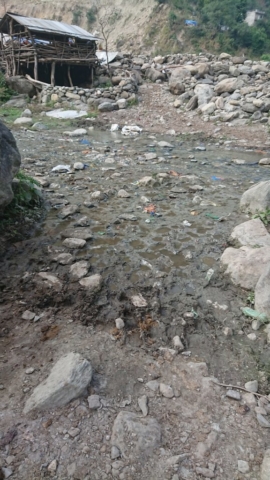 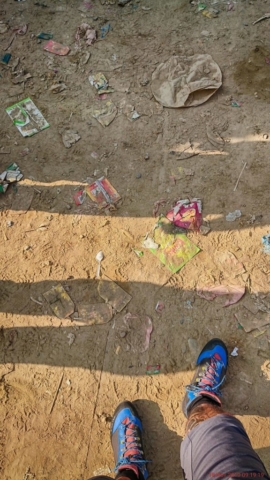 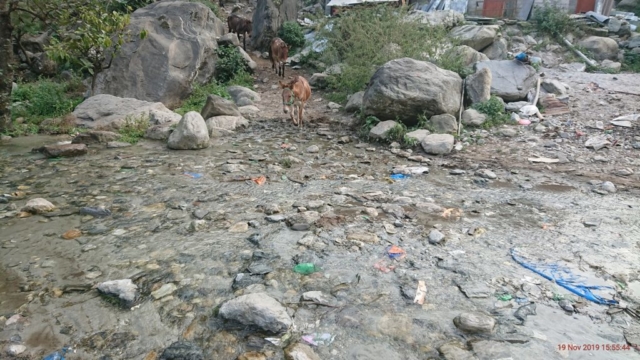 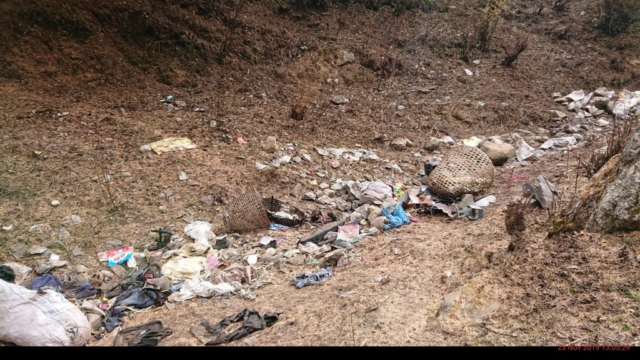 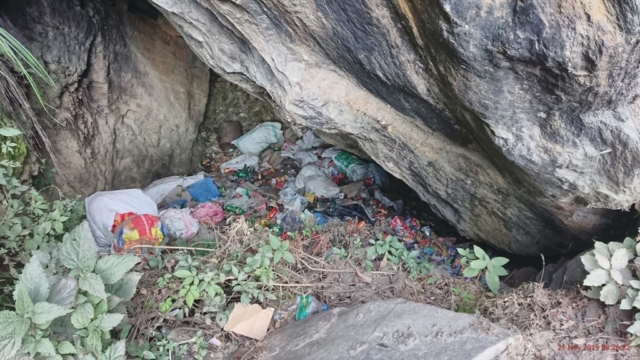 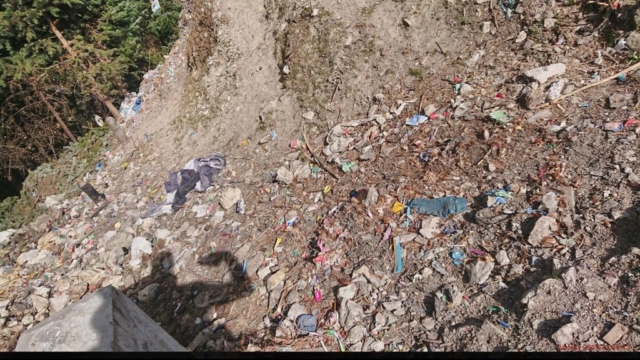 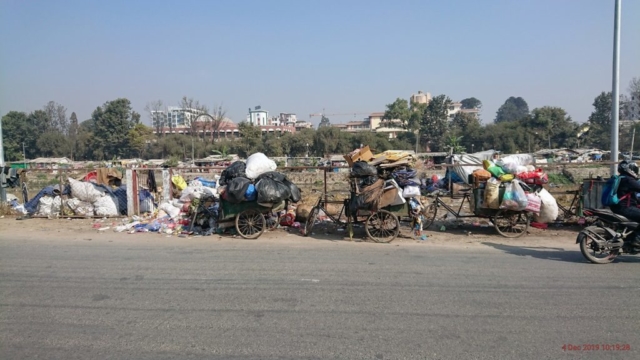