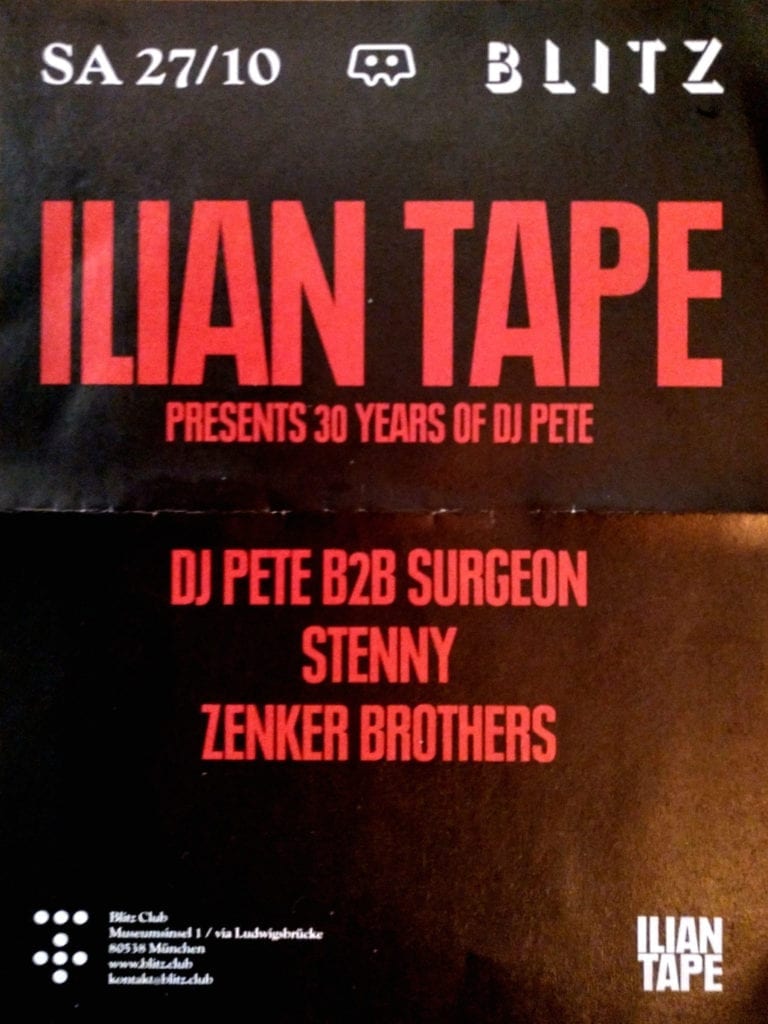 Arriving alone to the club Blitz around 02:00AM, Stenny was just finishing what I saw as a perfect warmup. Beautiful sounds without forgetting about the tempo. Just leaving a good feeling for what was coming. I was happy and and the same time sad, because the club was not so crowded as I expected for such a lineup. Happy because I would have more place for dance. Sad because of seeing that this kind of events are in general -9999999 appreciated by the people in Munich…. (no Ben Klock or no Nina Kravitz?!? Club empty 🤷‍♂️)

Dj Pete & Surgeon started with no mercy. During the first hour, they gave what they can, raw loopy techno for the dancefloor, with some 90s rave feeling. I recognized a few tracks winch I cannot Id but which I have heard for the first time a long time ago.
Then it got darker and somehow to the nowadays time, playing tracks like “Shed – Boom Room“.

After some time the UK Hardcore came to the game, confirming again that the German public can only dance “4 to the floor Techno”  because a lot of people are started to leave the dancefloor. Some famous Surgeon Breaky tracks were played too, bringing tons of old memories to my head….. from those first Techno Sets which I heard on my Creative Labs – MuVo V100 Mp3 long time ago.

After three hours of a really beautiful and special b2b which I hope I’ll not forget, I decided to leave home. Somehow with a smile and good feeling about what I’ve seen. (my interior was disappointed, but that’s a topic for another day). At the same time kind of sad because of not seeing the Zenkers in action…(a long time ago since last time….), but alone and without cheating (drxgs), it was just not possible for me.

PS. Blitz is that kind of club where you can just go alone to have a good experience with such an incredible SoundSystem. Big up for Ilian Tape people who are still bringing interesting sounds, acts and Djs to the big village named Munich.

And the Stickers detail was great!!